A Better World Begins With You

The Bahá’í Faith has been an active part of the Lake Oswego community for nearly a century. Bahá’ís believe that a just and peaceful global society is not only possible – it is inevitable. As such, Bahá’ís in Lake Oswego and around the world strive to give expression to the oneness of humanity, a core principle of their faith, by seeking to eliminate racial prejudice, advance the equality of women and men, and build a vibrant spiritual community reflecting the human family in all its diversity.

Join us, and participate in our activities

The Baha’i community of Lake Oswego is horrified by the attacks against the Asian community in our country. These hateful acts of violence, together with the many similar acts against our African American brothers and sisters, call for the urgency of working to build communities where our diversity is a cause for celebration, where service and promotion of unity are our surest weapons against these forces that threaten to divide us.

“Ultimately, the power to transform the world is effected by love, love originating from the relationship with the divine, love ablaze among members of a community, love extended without restriction to every human being. This divine love,… is disseminated by enkindled souls through intimate conversations that create new susceptibilities in human hearts, open minds to moral persuasion, and loosen the hold of biased norms and social systems so that they can gradually take on a new form in keeping with the requirements of humanity’s age of maturity.” –Baha’i Writings

The Bahai Community of Lake Oswego

In light of the tragic racial incidents of the last several months and their growing aftermath, the Baha’i community of Lake Oswego feels the urgent need to address our fellow community members.

We believe that the tensions, divisions, and injustices that currently beset America are symptoms of a deep spiritual disorder, manifested in rampant materialism, widespread moral decay, and a deeply ingrained racial prejudice. As a result, millions of our fellow Americans, subject to systemic injustices, are prevented both from making their full contribution to society and from partaking in its benefits. No one is immune: we are all members of an interconnected society and we are all affected by its illnesses.

We grieve with all those who are suffering. At the same time we are animated with hope and confidence for the future of our country and of the world. We affirm, with the great spiritual traditions of the planet, that love is the generative cause and ultimate goal of creation. We recognize the innate nobility of every human being and their boundless spiritual potential. We acknowledge the organic unity of the human race and celebrate its infinite diversity. And we believe that its unity is unattainable unless it is raised upon a foundation of justice.

We are united with Respond to Racism and all others in Lake Oswego who, in the words of the superintendent of the Lake Oswego schools, “stand in collective support of the beautiful and growing diversity among us…and are committed to working every single day with others to make our schools and community places for each and every member of our community thrive and prosper.”

With grieving but hopeful hearts,
The Bahai Community of Lake Oswego

At a time of rapid change in the world today, humanity needs, more then ever, a unified vision of the nature and purpose of our lives and of the future of our society. Such a vision unfolds within the writings of Bahá’u’lláh, the Prophet and Founder of the Bahá’í Faith.

The Bahá’í community in Lake Oswego is exploring Bahá’u’lláh’s spiritual teachings with people of all backgrounds and beliefs and is learning how this vision of the oneness of mankind, best expressed by the principle of unity in diversity, can be translated into action for the betterment of the world.

Throughout history, God has sent to humanity, according to the needs of the time, a series of Divine Educators, known as Manifestations of God. These Divine Educators include Abraham, Krishna, Moses, Buddha, Zoroaster, Jesus, Muhammad, the Báb and Bahá’u’lláh. Their distinct social and spiritual teachings have guided humanity’s efforts to advance civilization.

Bahá’u’lláh, the most recent of these Divine Educators, teaches that humanity is on a path to maturity, much like an individual who progresses through various stages of development. The current turmoil in the world can be viewed as humanity experiencing the turbulence of adolescence.

The writings of Bahá’u’lláh provide a wealth of spiritual teachings that assist us in progressing on this path towards maturity, and in building a peaceful and unified world.

SIGN UP HERE FOR FREE CLASSES AND SPIRITUAL DISCUSSIONS

Contact us today to learn more about the Bahá’í Faith, or to see how you can join us in working towards the betterment of our city and our world. 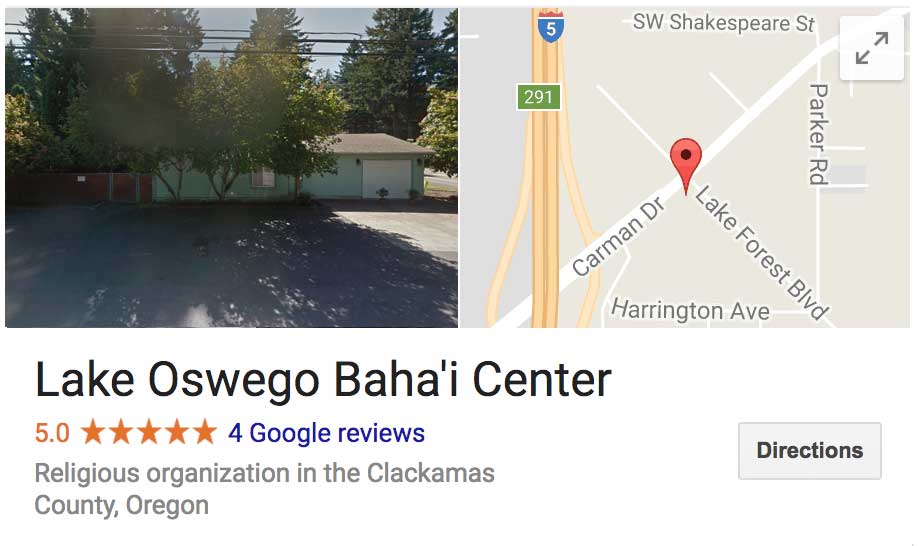